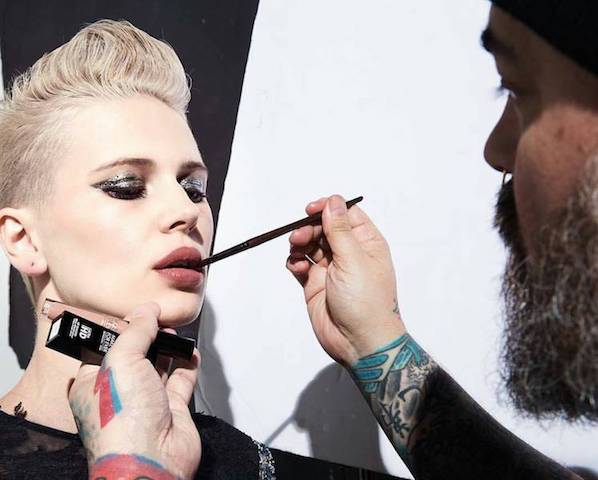 The Makeup Show NYC is just around the corner and we couldn’t be more excited!

Every year, the show brings brands, education, art and more together under one roof. It’s always a great event to cover and I always leave learning new things and getting to see and test products up close and personal. The Makeup Show’s Director of Artistry, James Vincent gives us the scoop on what we should be looking for at the show this year. Here are the spring beauty trends at the Makeup Show NYC 2019 shared by James Vincent.

James Vincent on Spring Beauty for 2019: “It is an exciting season for beauty. From jewel-toned eye makeup taking center stage at Versace, to red lips pouting perfectly from Paris, NYC, and London. And the love of all that is gilded and glittery, there are so many ways to bring your individual beauty style into Spring and Summer 2019.”

Vincent shares that warm tones are perfect for giving some summer radiance. Runways and red carpets show a summery look was all the rage, ranging from a hint of bronzer to a golden tan. Prabal Gurung, Alberta Ferretti, and Michael Kors and Chanel are just a few of the fashion legends leading us to beachy beauty. Danessa Myricks Beauty Oil brings a sensual radiance to the skin with actual gold leaf. Melanie Mills Hollywood gives you gorgeous gleam from head to toe in shades from Rose Gold to Bronze, bringing out your summer goddess.

Glitter is not just for kids. Vincent shares that he saw glitter and shimmer on the runways, too. “It was used in the form of jewel and foil finishes on the eyes at Giambattista Valli, glitter lips at Jeremy Scott, crystal finish at Valentino and metallic eyes at Versace. Every artist from Val Garland to Pat McGrath are bringing the bling this season. Lemonhead at Alcone offers easy to control glitter without difficult cleanup. Shadow palettes like Viseart and MustaeV make it easy to create shimmery looks. For metallics, Mehron Metallic Powder is ideal for true gold and silver touches. Stila at Frends beauty gives glitter a fashion-forward look for eye and lip with a while collection of jewel tones glitters, and metallics that are perfect for the pro or everyday makeup wearers.” Glitter will be a big part of spring beauty.

Bring Out Your Inner Kitty

The classic cat eye comes in this season but in new colors and more dramatic shapes that allow the wearer to make a statement. Many designers brought dramatic shapes to the runway, but brands like Burberry did it in shades like taupe. Take a look at Danessa Myricks Color Fix or Cushion Color for a variety of colors. Brands like Dior showed a more artistic flair and finish and many challenged the size and shape of the cat eye. Crown Brush eyeliner pens come in a variety of shades and are under $10! Kevyn Aucoin at Camera Ready Cosmetics has the most beautiful black liner with a perfect tip for natural or dramatic looks. Kryolan Skin Liner pens also come in a variety of shades.

“This season it was a truly glowing, natural look. Everyday skin care and beauty routines help to bring a gorgeous complexion all summer long. Start by gently exfoliating- I recommend Twinmedix Resurface, a non-granular exfoliant that gets rid of dry and dead skin. Rebels and Outlaws Potion is the perfect blend of organic Hydrosol and essential oils infused with Crystal to balance your skin PH and your energy. Protect and moisturize with celebrity secrets from brands like Perricone MD and Mario Badescu Skin Care. For coverage, try airbrush with Mineral Air or Kett Cosmetics for a flawless finish that looks natural and lasts through the intense Texas summer. Try Limelife by Alcone One Drop Wonder and Dew Date for skin that has the exceptional glow without the grease.”

What Could Be More Classic Than a Bold Red Lip?

“Paris Fashion Week embraced pillar box reds at Givenchy, orange reds and deep, burgundy tones at Moschino, and more. Look to Smashbox Cosmetics and MAKE UP FOR EVER for the largest selection of lip looks. Hollywood favorite Stillazi has lip color in gorgeous sheer textures that allow anyone to dare to wear the red lip they have been longing for.”

A huge part of beauty remains about the lashes and brows. But some changes are coming. Vincent says, “Bold brows and lush Lashes are here to stay but the hardliner brow and overly black lash of the Instagram set is nowhere on the runway. Bushy brows took over at runways, ranging from Fendi and Moschino to Jeremy Scott and Michael Kors. Lashes are still going strong at high fashion brands like Chanel, Prada and Tom Ford, but the look is more polished and romantic than the overly exaggerated lash look we have been seeing the last few seasons. Brow pens and pencils are the perfect way to sketch in more natural fuller brows. Try combining a lengthening mascara like Smashbox with a volumizing mascara like Kevyn Aucoin for a lash look that feels customized or throw on a wispy lash set from Ardell for a softer look that still has an impact.”

The Makeup Show NYC 2019 runs from May 5-6 . For more info, visit: themakeupshow.com/nyc

Lillie Morales is a writer, photographer, and creative entrepreneur. She is a graduate of Kean University where she studied Communications Journalism and minored in Media and Film. She has worked for companies including Walt Disney, Univision, and MTV Networks.
Fashion, writing, and photography are her passions. You can see all of this on JerseyFashionista.com, a website she created which covers fashion, beauty, and lifestyle.