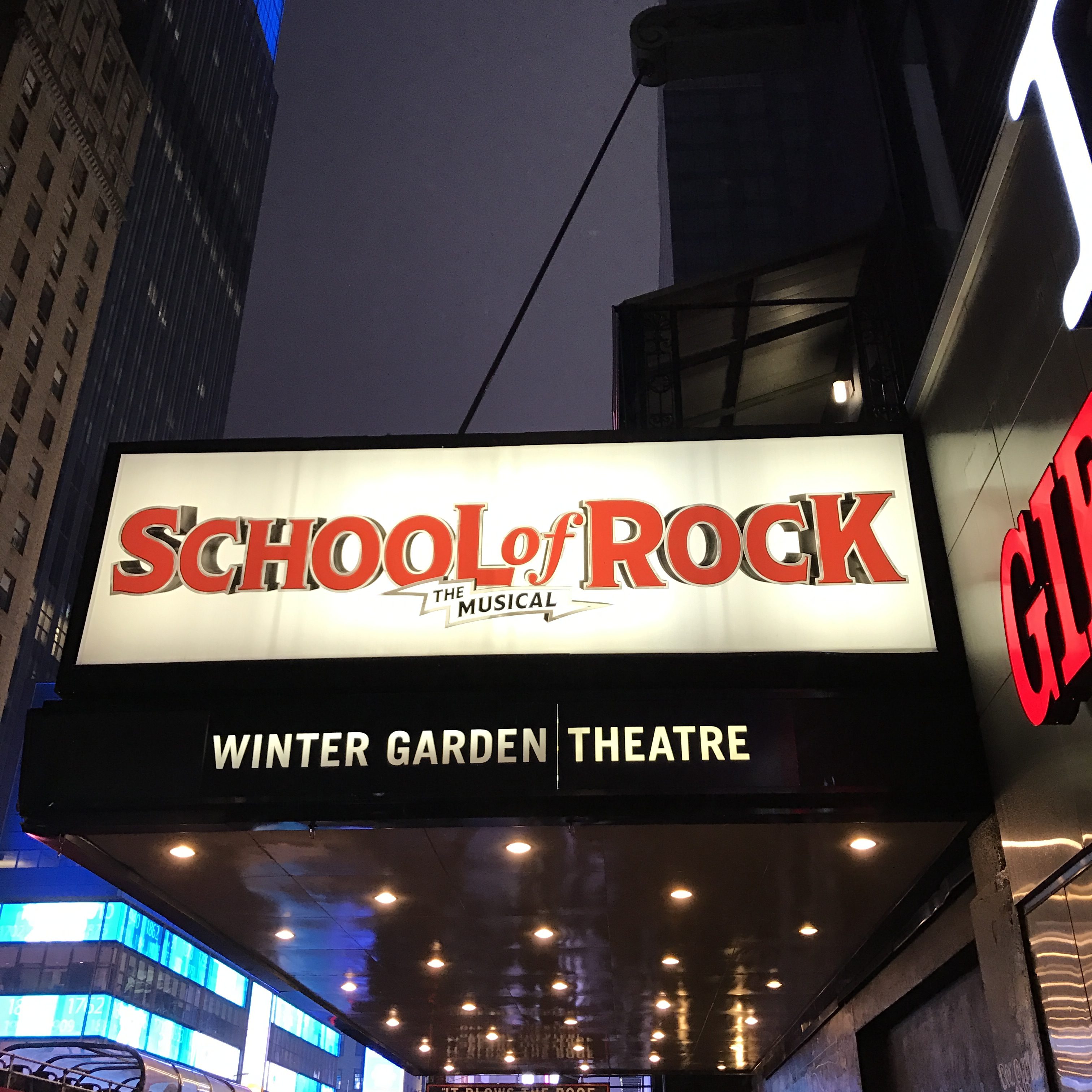 Leisure, LifeStyle February 15, 2017
Forget what you saw in the movie, School of Rock the musical, from Andre Loyd Webber, just rocks! The broadway musical is full of high energy and great performances by lots of young talent. It will make you laugh, dance, even tear up a little.
School of Rock is a story about a musician named Dewy Finn who refuses to give up on music. He rents a room from his friend Ned (former musician) who is now “adulting” by working as a substitute teacher and living with his girlfriend, Patti (who hates Dewy for lack of rent). Dewy is pressured by Patti to get his act together or move out. When he gets a call that is supposed to be for his friend Ned for a new well paying teaching job, he decides to take the job in Ned’s place.
Dewy really wings his interview but the school principal is desperate to fill the position. He needs the money to pay rent, so he pretends to be Ned. He isn’t too excited about working with kids until he hears them playing classical music. Then, the fun really begins. The children are full of talent and Dewy sees the perfect opportunity to compete in the Battle of the Bands. Despite being a a little whacky, he teaches them the beauty of music and gives the children the gift of confidence.
I especially loved “Stick it to the Man,” one of the songs where Dewy teaches the kids to use music as an outlet for pain, anger, sadness- a way to express themselves. This resonated with me so much because this was the reason I encouraged my daughter to take up music when she showed interest. Growing up, music was also my outlet and it’s really such an amazing gift to any child.
Ms. Mullens, the school principal also sang a number that reminds adults not to forget the music that lives inside of us. And the children also gave a heart warming performance that really hits you if you’re a parent. It tells about how sometimes parents don’t take the time to listen. The song is emotional and shows a glimpse of each child’s home life. It’s really a powerful performance.
There were some references to today’s culture like Dewy saying he would vote for a woman president (referring to his little band manager Summer) or Billy, the band’s little stylist who loves fashion but his dad pressures him to love football, the two dads who adopted and more. It was refreshing to see because I’m sure many viewers can relate.  The kids in the cast all really play their instruments, too. They are so talented and full of energy. It was just a pleasure to watch them on stage. For such young talent, they did an amazing job. 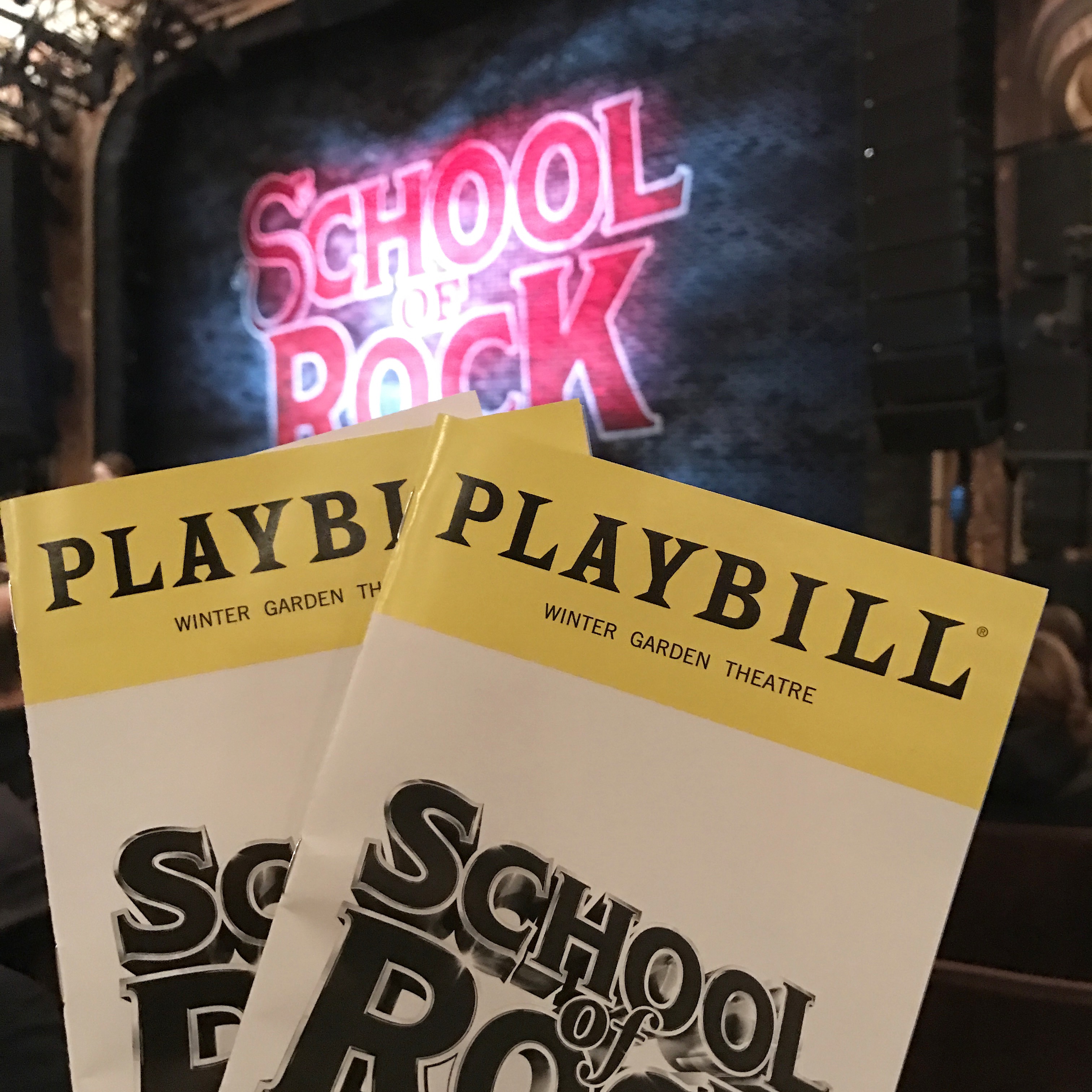 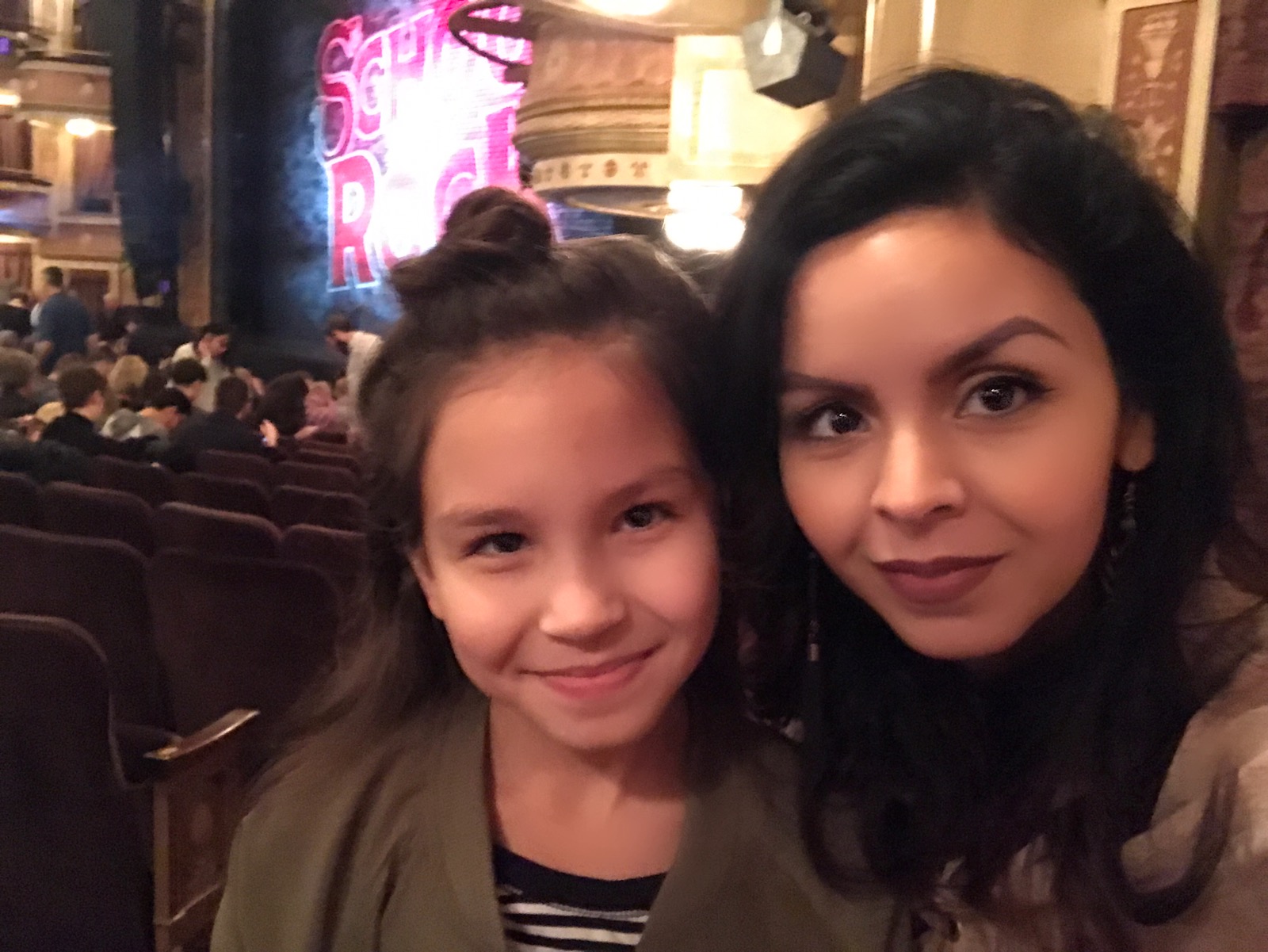 I had the opportunity to experience School of Rock with my daughter, Liana who is ten years old. I have to say, the musical was perfect for her age. The children in the story are also ten which makes it more relatable to her age group. There are some words that the younger kids may question or be shocked about. It really depends on your child- for example, if you have a child who picks up on everything it may be a good idea to wait.
Liana absolutely loved the show. As a little musician herself, she seemed to be so interested in watching these kids that are around her age perform. I saw her eyes light up when Dewy, the music crazed substitue teacher, told his student, Katie (who plays cello) that she could play the bass. Liana has been playing cello for almost three years and begging me for an electric guitar. Katie’s bass skills rocked and she was definitely my kid’s favorite character.
After the show, we got to meet some of cast members and Liana got her play bill signed. She had such a great time. 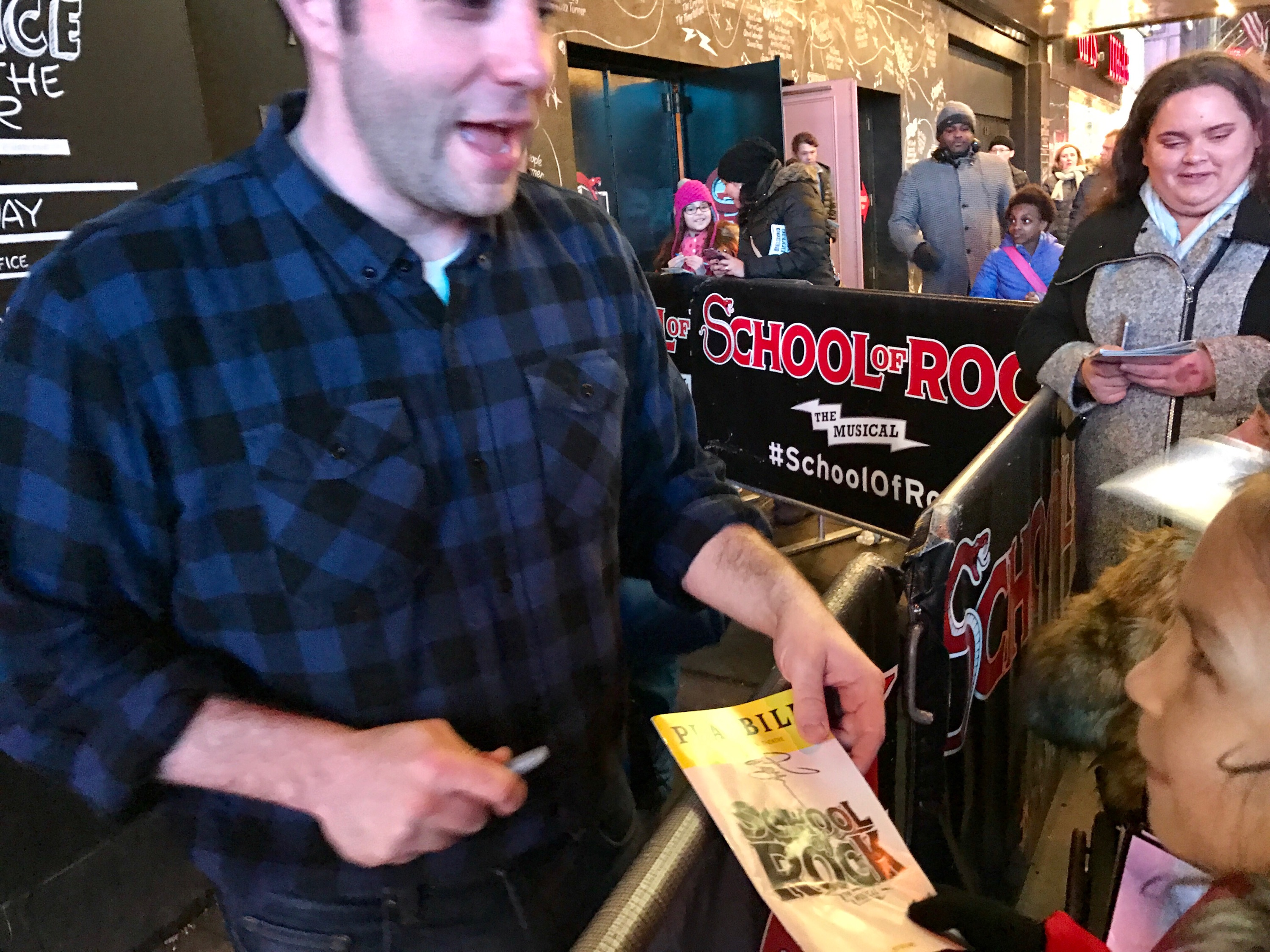 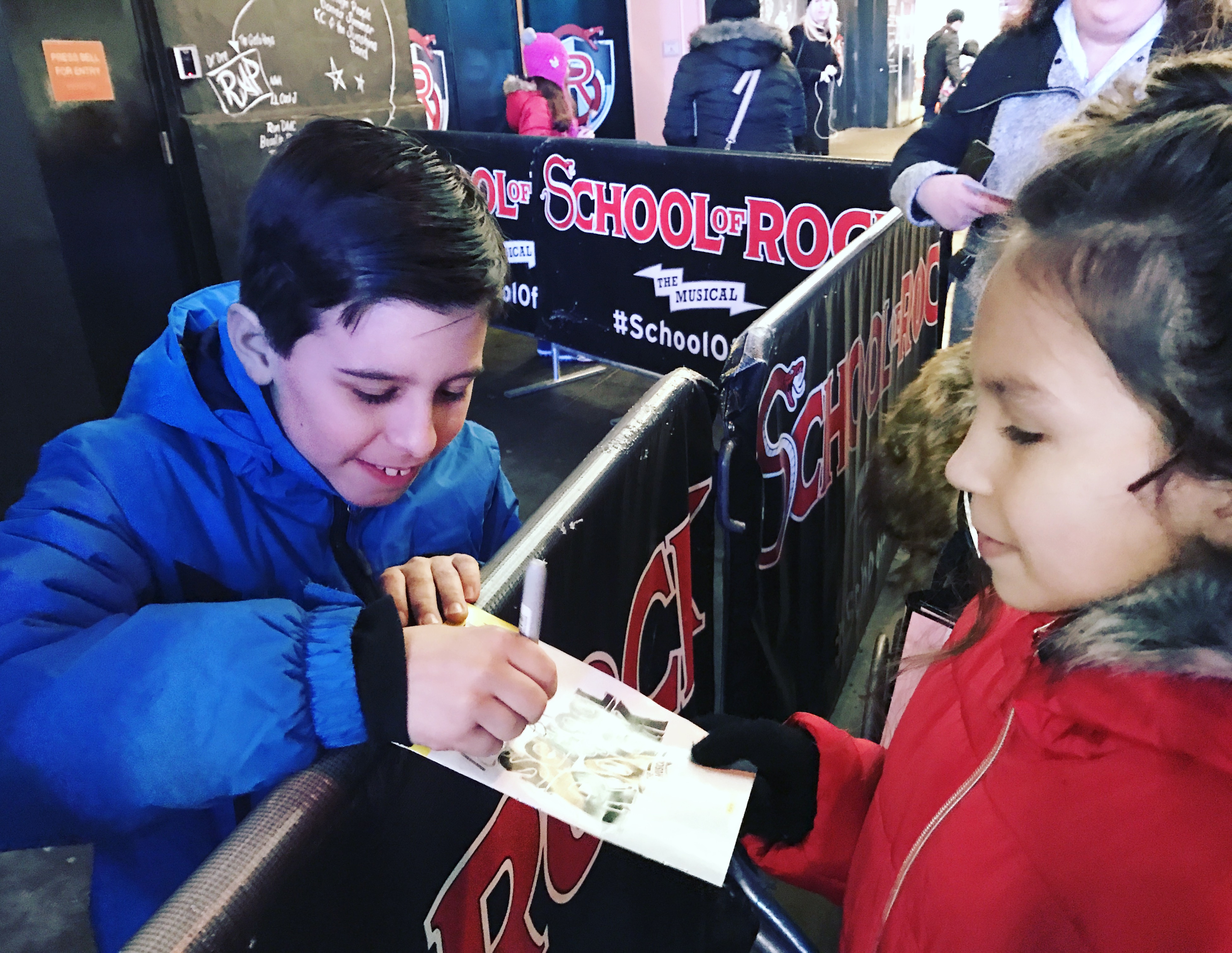 In her words, “It was awesome!” 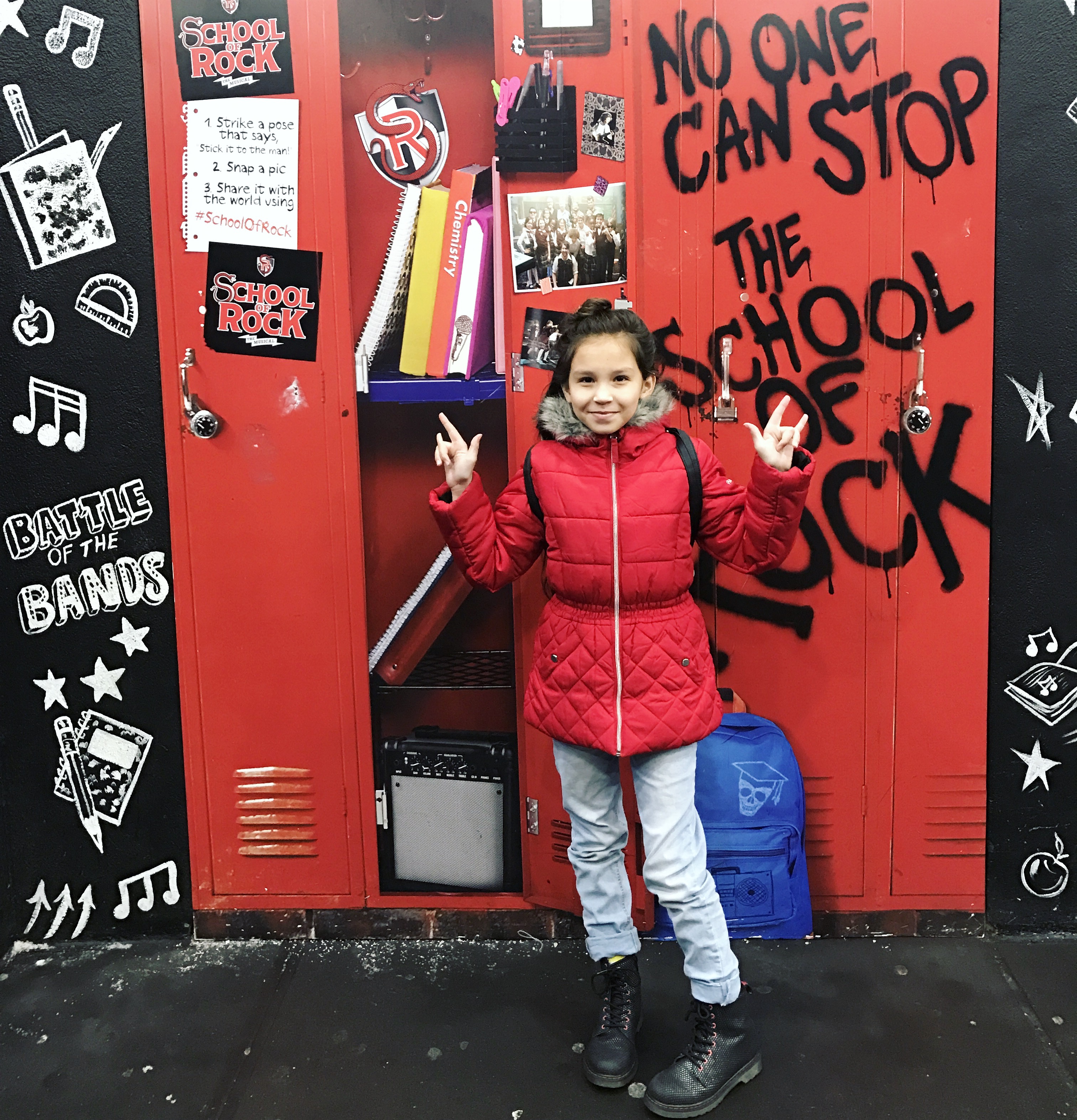 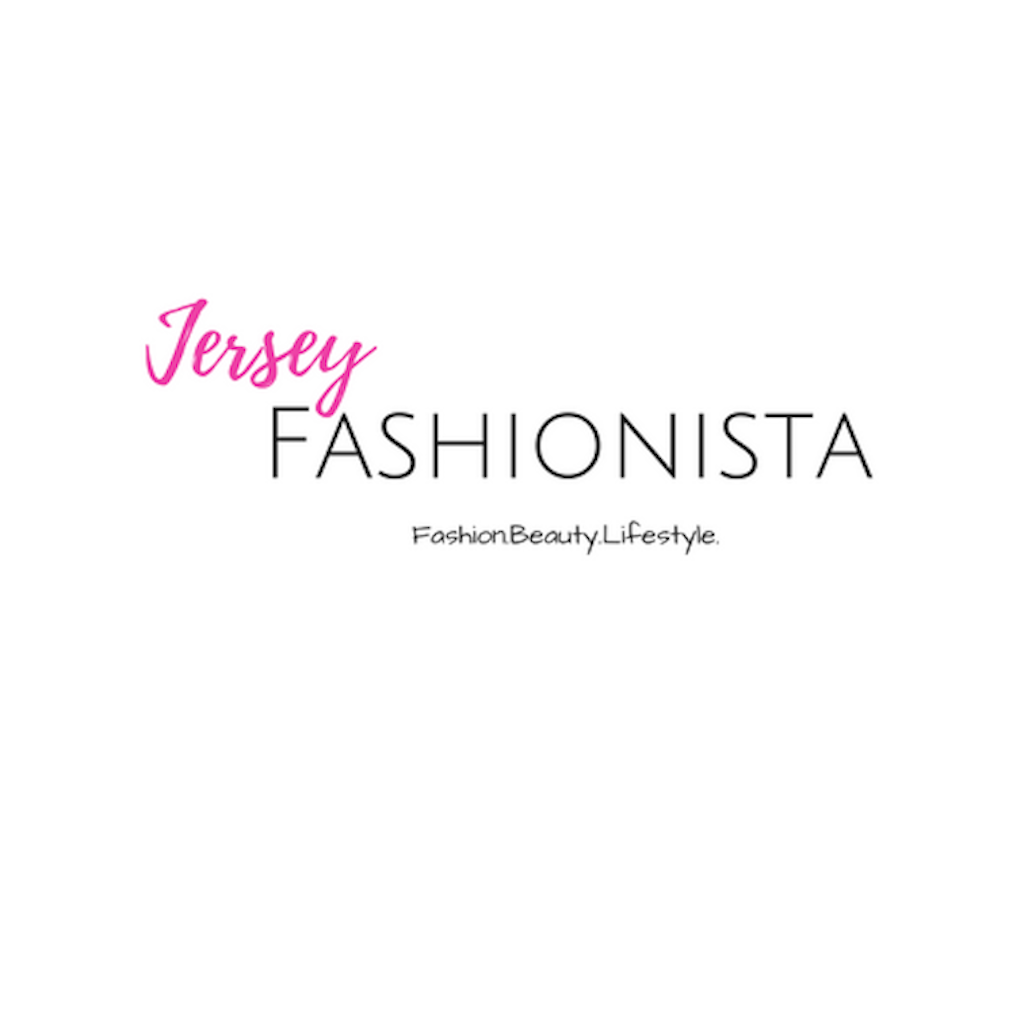