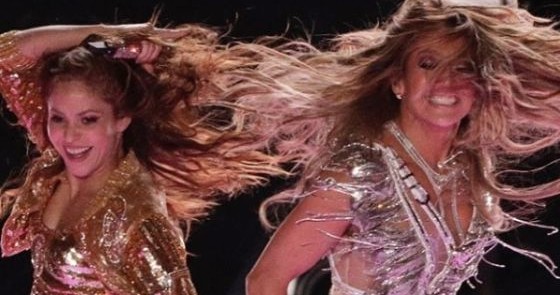 Ever since I can remember, I’ve watched super bowl for two things: the ads and halftime. But after the last few, I kind of lost interest. That’s up until today when two Latinas rocked the biggest stage in the U.S.A.

Latinas in the House

JLo and Shakira along with other talented artists like J.Balvin, Bad Bunny and dance group, Swing Latino put on an awesome performance filled with energy and Latin flair. Shakira rocked it with her belly dance moves and electric guitar and JLo with her choreography and hit songs. The two didn’t miss a beat.

The two shared their excitement during a pregame press conference.

“Ever since I saw Diana Ross fly off into the sky at the Halftime Show, I dreamed of performing at the Super Bowl,” said Lopez. “And now it’s made even more special not only because it’s the NFL’s 100th season, but also because I am performing with a fellow Latina. I can’t wait to show what us girls can do on the world’s biggest stage.”

“I’m so honored to be taking on one of the world’s biggest stages in the company of a fellow female artist to represent Latinos and Latinas from the U.S. and all over the world — and to top it off, on my birthday!” said Shakira. “This is a true American dream and we are going to bring the show of a lifetime!”

Mamas Who Still Got It

These two are GOALS. They’re both mamas over 40. Not only is their collaboration inspiring but the fact that they can still get up there and do their thing after kids, marriages and, well- life, that’s pretty badass.

Related: Puerto Rico: Things to do for Free

I think my favorite part was when Jennifer Lopez’s mini graced the stage with her powerful voice. I remember watching a video of her in the past where she felt shy to get on the stage and little girl, this is one big stage to get on! Get it chica!

Aside from that, the little girls behind her, the female symbol and that “bonita bandera” (beautiful flag. That got me right in the feels especially with all that Puerto Rico has endured as of late. Thank you JLo for reminding people that Puerto Rico is a part of the U.S.A. as the song says, we are “born in the USA”, coño!

“I’d like to inspire as many little girls and women and Latinos and people around the world to dream as big as they want,” Shakira said during an Instagram takeover.

As a mom, I feel like this was such a cool moment to share with my daughter. Sure, they shook their booties and all (who doesn’t) but it’s always nice to see some representation. Super Bowl is American as can be and growing up Latino American, we sometimes feel like a totally different species. It’s not the first time a Latino has preformed during halftime but it is the first time we get two iconic Latinas (and friends) which is pretty epic.